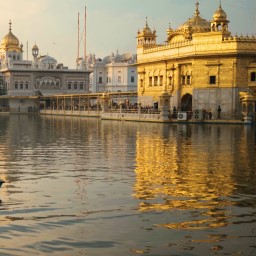 Phool Bagh is a beautiful landmark in Orchha, and represents the aesthetic values of the Bundelkhand dynasty, who were the rulers of this small kingdom in Madhya Pradesh. The garden is a gorgeous span of lush greenery that features a central row of fountains. It also has a subterranean structure underneath, which was used as a summer retreat by the kings of Orchha.

The garden is well-planned and has an ingenious system of water ventilation that connected the underground palace with Chandan Katora, a bowl-like structure from whose fountains, droplets of water filtered through to the roof, simulating rainfall and keeping the complex cool. The Phool Bagh also hosts the Badgir Sawan Bhadon Towers, which were built to catch the wind and cool the place. The garden invites visitors both for its scenic and architectural merits.

There is a tragic tale associated with it and it is said that it was built as a memorial for Dinman Hardaul, the prince of Orchha. The prince is believed to have died a martyr to prove his innocence to his elder brother.

Other Attractions in Orchha

Resembling a palace, this is the only temple in India where Lord Rama is...

This beautiful temple dominates the town of Orchha with its shikharas...