A sprawling city dotted with temples, sacred tanks and pilgrimage sites, Kurukshetra, in Haryana, is rooted in history. It is said to be the battleground of the epic war between Pandavas and Kauravas as mentioned in the epic Mahabharata. It boasts its rich heritage and past glory in various majestic temples and holy tanks like Brahma Sarovar and Sannihit Sarovar. Named after king Kuru, an ancestor of the Pandavas and Kauravas, Kurukshetra has been a silent witness to many great events through the course of the history. It is also believed that Lord Krishna preached the Bhagwat Gita to Arjuna, a Pandava prince, here. According to mythology, Kurukshetra is spread over 48 kos (an ancient system of measuring land, wherein one kos is about 3 km) and envelops in its holy folds many temples. Legends abound here and have kept the stories of Mahabharata alive.

The sacred River Saraswati (now non-existing), along which the mighty Aryan civilization began and bloomed, was once the lifeblood of this land. In fact, if one is to believe the mythology that is associated with Kurukshetra, the holy waters of all the rivers that are considered to be sacred in Hinduism flow converge in Kurukshetra’s Sannihit Sarovar, at the time of Somavati amavasya and solar eclipse. It is also believed that if one takes a dip in the holy waters of one of tanks in Kurukshetra, one can attain freedom from the cycle of rebirth and ascend to heaven. Similarly, the locals are very fond of quoting the Mahabharata that says anyone who dies in this city attains salvation after death. This is the very city where it is said the great sage Manu wrote Manusmriti, the book of law and morality, which guides Hindus. Moreover, it is also believed that this is the place where learned sages compiled the Rig Veda and the Sama Veda.

The legacy of Kurukshetra through its attractions

Vishvamitra ka Tila is home to the remains of an ancient Vishnu temple. It is situated on the southern bank of now unexisting River Sarawati, on the outskirts of the town of Pehowa. The site is archaeologically important because of two inscriptions...

Believed to have been built over 5,000 years ago, the Sthaneshwara...

Built in the memory of the famous Sufi saint, Abdu'r-Rahim or...

Situated on the outskirts of Kurukshetra, this sacred water reservoir...

A sprawling fort that holds the secrets of at least three different... This is an important religious stopover as it is one of the 51... A stepwell named after Bhishma Pitamaha, who is believed to have... An important site that is immersed in Mahabharata lore is the... A unique combination of science and religion, the central attraction... Constructed by the royal family of the Nabha principality, the Nabha... This famous masjid, or mosque lies just behind the tomb of Sheikh... Situated on the banks of the now unexisting Saraswati river, the... A sprawling fort that holds the secrets of at least three different... Situated on the outskirts of Kurukshetra, this sacred water reservoir... Built in the memory of the famous Sufi saint, Abdu'r-Rahim or... Believed to have been built over 5,000 years ago, the Sthaneshwara...

Vishvamitra ka Tila is home to the remains of an ancient Vishnu... 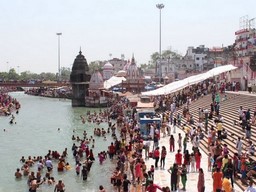 The nearest airport is in Chandigarh, which is connected with all the metro cities in the country.

Located on the linking road from NH 1, Kurukshetra is well-connected with all the nearby cities.

Kurukshetra is in itself an important station in the railway network. Some of the important trains that pass from here include the Shatabdi express, Amritsar express, Jhelum express, Kalka Mail and Himalayan Queen.