Lying along the banks of River Cauvery, the ancient city of Tiruchirappalli (Trichy) is soaked in spirituality and history. Speckled with a host of temples and a smattering of other religious sites, the city is a haven for pilgrims, who can get closer to their god amidst peace and tranquility. Trichy was once the stronghold of the Chola rulers and the Pallavas, and has been bestowed with a glorious legacy, evident in its marvellous temple architecture. The Rock Fort, an endowment of the Nayaks, who ruled the region after the Pallavas, is the sentinel of the city, towering high as if to keep an eye on the land that is home to a rich heritage. The city is also noted for its exquisite arts and crafts, including Chola bronze statues and Trichinopoly cigars that are admired all over the world.   Some people call Trichy the Rome of the east as it is dotted with colleges, churches and remnants of various missions of the 17th century.

The legacy of Tiruchirapalli through its attractions

Our Lady of Lourdes Church

Situated near Rock Fort, the Church of Our Lady of Lourdes is a prominent stopover on the tourist circuit. It is modelled after France’s Basilica of Lourdes, the world-famous place of pilgrimage in the southern fringes of the country. It’s... Located on the outskirts of Tiruchirappalli, Grand Anaicut is a 330 m...

The Rock Fort towers over the city of Tiruchirappalli and is built...

Located near Tiruchirappalli Fort Railway Station, the tomb of Muslim... Explore the places near midway through Madras

Located on Pudukottai Road near the airport, the Anna Science Centre... Located on a 50-ft-high hill of white rock, Thiruvellarai is the... Located in the periphery of the city, Narthamalai is a small cluster... Our Lady of Lourdes Church

Situated near Rock Fort, the Church of Our Lady of Lourdes is a... The spiritual town of Uraiyur is best known for the Azhagiya Manavala... Divided into three sections, the 685-m-long Mukkombu Dam or Upper... Exploring the Government Museum is like stepping back into royal... Located near Tiruchirappalli Fort Railway Station, the tomb of Muslim... Located on the outskirts of Tiruchirappalli, Grand Anaicut is a 330 m... 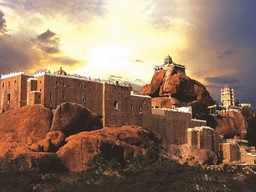 The Rock Fort towers over the city of Tiruchirappalli and is built... Also known as Kumara Vayalur, Vayalur is located on the outskirts of... The pilgrim town of Samayapuram is located on the outskirts of... Located in the periphery of Tiruchirappalli, is the river island town... Pachamalai is a green hill range lying about 80 km north of... 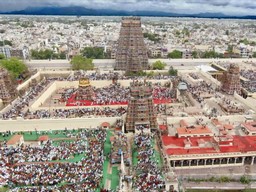 Tiruchirappalli has an airport that is connected with major Indian cities.

Good motorable roads connect the city with other cities and towns in South India.

Most important cities in India are connected by rail with Tiruchirappalli junction.