Fresh mangoes are chopped and blended to make a thick juice, which is served with fresh hot puris (small, round deep-fried wheat flour).

Made using burnt milk, this decadent dessert is appreciated by all. It can also be made with hung curd, which is flavoured with saffron. It is a part of the famed Indian thali, and is served at a majority of Maharashtrian weddings. Also known as patra, this Maharashtrian delicacy is made by dipping the leaves of the colocasia plant or the taro root in sweet and tangy flour, stacking them together and then finally steaming and frying them.

This spicy paratha (Indian flatbread) is prepared extensively in Maharashtra. Made of rice, wheat, bajra, jowar or besan flour, it tastes heavenly with a dollop of butter and cool curd.

This sweet paratha (Indian flatbread) is filled with lentils and jaggery. It is best had hot with a dollop of ghee (clarified butter), and is a made in huge quantities during the festival of Ganesh Chaturthi, which is perhaps the grandest festival of Maharashtra.

Pearl tapioca (sabudana) is soaked overnight to make this tasty meal. Peanuts, grated coconut, green chillies and ghee (clarified butter) are added to the sabudana and cooked to make the khichdi, a preparation of rice and lentils. This Maharashtrian delicacy is served in big hotels and roadside eateries, and has a savoury taste. It is a thick vegetable curry made from seasonal vegetables, potatoes, tomatoes and onions served with pav, which is bread roll, and is topped with butter. It is best served hot.

The word 'pav' comes from the Portuguese word for bread and 'bhaji' in Marathi means a vegetable dish. Pav Bhaji is said to have been originated in the state of Maharashtra as a midnight meal for textile workers in the 1850s. As the story goes, since the mill workers worked late into the night, their wives would feel annoyed when they got home and asked for dinner. Thus, to make a filling meal, they started collecting leftover bread and mixing all the vegetables and mashing them. This was a rough version of the delectable pav bhaji that is relished today. Groundnuts and jaggery are combined to make this delicious sweet snack that is enjoyed by one and all. It has many variants where, instead of groundnut, the makers use sesame, khobara (desiccated coconut) and even chana (gram). The name of every chikki variety comes from the ingredients used in the making. A fast-food savoury snack made from puffed rice, onions, tomatoes, cucumber and tangy tamarind sauce, it is mostly available as chaat (savoury snack) at the beachside eateries and the alleys of Pune and relished by locals and visitors alike. Legend has it that chaat was first made in the kitchens of Mughal emperor Shah Jahan when his doctor advised him to eat light and spicy foods. While the exact origins of bhel puri are unknown, many believe that it was brought to Maharashtra by a Gujarati migrant. There is an interesting tale associated with this scrumptious snack.

It says that during British rule in India, a famous chef, William Harold, was sent to help with the meal preparations for the troops. Since he was so good, he was soon promoted to a cook of a high-ranking official. It so happened that the officer ordered Harold to cook him a local recipe and he learnt how to make bhel puri, which was made of puffed rice and potatoes. It so impressed the soldiers that the officer asked Harold to look for more local recipes. It is said that the chef could not find any more recipes and when he told his officer that he would be eating french fries that night, the officer was so enraged that he shot Harold in the head. Sesame seeds, ginger, coriander powder, chilli powder, turmeric powder, cumin powder, green chilli, asafoetida, sugar and salt are mixed with desiccated coconut and poppy seeds to make this delicious snack that goes perfectly with tea. It is well-known across the state of Maharashtra. 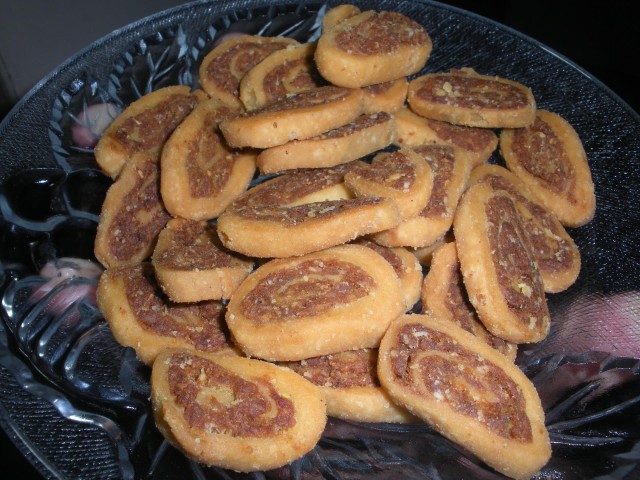