Of spirituality and prayer

A perfect blend of divinity and serenity, the picturesque town of Badrinath in Uttarakhand's Chamoli district, prides itself as one of the most visited tourist destinations of India. Considered as the abode of Lord Vishnu, Badrinath is among the holy shrines of the char Dham pilgrimage undertaken by devotees.

Nestled between the Nar and Narayan mountain ranges and sprawled along River Alaknanda, Badrinath is home to some of the most impressive peaks of the Garhwal Himalayas, including the majestic Neelkanth peak. An easy trek takes pilgrims to the Badrinath Temple, one of the most revered religious sites of Hindus.

According to ancient texts, there are many spots of pilgrimage in heaven, earth and the world, but there has been none equal to Badri (as it is popularly called), nor shall there be. Dedicated to Lord Vishnu, the Badrinath Temple is one of the most... One of the major peaks of the Garhwal Himalayas, Mount Neelkanth...

With the majestic Zanskar range in the backdrop, the World Heritage...

The Mata Murti Temple is a Hindu shrine located 3 km from Badrinath....

Explore the places near the Land of spirituality and prayer According to ancient texts, there are many spots of pilgrimage in... The Bheem pul is located at the point where the Saraswati river meets...

Brahma Kapal holds special importance for Hindus as it is believed to...

Perched at an altitude of 3,380 ft above sea level, the Charanpaduka... This tiny hamlet has gained immense popularity among travellers in...

The Mata Murti Temple is a Hindu shrine located 3 km from Badrinath....

Narad Kund lies a stone's throw from the famous Tapt Kund. It is one... One of the major peaks of the Garhwal Himalayas, Mount Neelkanth...

The Panch Dhara is a group of five water streams that originate in...

A famous boulder located a few miles from the Badrinath Temple,... Believed to be the abode of Lord Agni or the fire god, the Tapt Kund... With the majestic Zanskar range in the backdrop, the World Heritage... 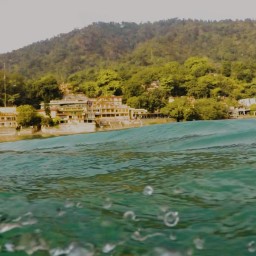 How To Get Here

Around 317 km away is the Jolly Grant Airport near Dehradun. Flights from several major Indian cities land here.

The major cities of north India are well-connected to Badrinath. One can use buses that ply regularly from Delhi, Haridwar and Rishikesh to Badrinath.