It is more like an adventure tour that lets one scale through the highest mountain peaks and explore the beautiful surroundings. Jeep safari also gives one an opportunity to get a close look at how people live in the mountains.

Be flown to the snow-capped mountain peaks in a helicopter, and then, hit the powdered slopes on skis. As you rush down under the stunning blue sky, with the cold mountain air adding to the thrill, the experience is exhilarating.

Kullu town, around 40 km from Manali, attracts river rafting enthusiasts, who want to tackle the gushing Beas river. There are several amazing rafting areas to be explored in this region, offering all categories of rapids. The best time is from January to June and from September to December.

Water sports can be enjoyed in the Pong Dam or Maharana Pratap Sagar, which is 42 km long and 2 km wide, and looks more like an inland sea. The water sporting activities here are organised by Himachal Tourism and the Atal Bihari Vajpayee Institute of Mountaineering and Allied Sports.

In winter, skiing can be enjoyed in the stunning Solang Valley, which is located approximately 12 km from Manali. It is also called Solang Nala and hosts a ski festival every year that attracts thousands of tourists. Before skiing, one is given expert guidance and assistance sessions. One can also ski at Rohtang, Gulaba, Dhundi and Marhi.

A hotbed for paragliding, the slopes and peaks around Manali are dotted with paragliders in summer months. From beginners to professionals, there are options for everyone. 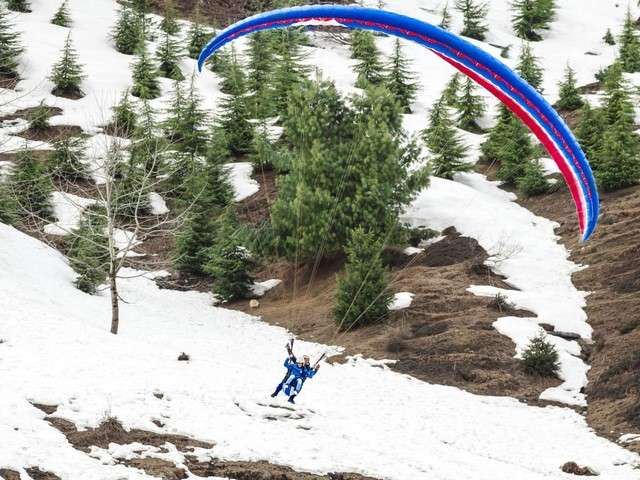 While the main Manali town lends itself to wonderful walking trails, the surrounding slopes and peaks make for great day hikes and longer treks. These range from easy and moderate to even difficult and can take you to places like Solang Valley, Lama Dug, Jogni Waterfalls and Gulam Lang. So put on your hiking shoes and set on an adventure to explore the beautiful and serene sights of the landscape of Manali. Hiking also gives one an opportunity to camp here.

Mountaineering and rock climbing can be enjoyed at many locations in Manali and its surrounding areas. The Atal Bihari Vajpayee Institute of Mountaineering and Allied Sports located here organises courses for different levels of training.

About 51 km from Manali is the stunning 3,978-m-high Rohtang Pass, which is the gateway to Lahaul-Spiti, Pangi Valley and the Ladakh region. One of the most scenic places in the state of Himachal Pradesh, the pass remains snow-covered for most of the year and is motorable only from June to October. Lying on the watershed between the basins of the Chenab and Beas rivers, the pass makes for picturesque drives. It is said to have once served as an ancient trade route for people living on either side of the Pir Panjal range.

During summer, visitors can be seen enjoying sledge rides in the surrounding snow-covered slopes. But accessing this pass requires special permit, which is valid for only one day, and can be obtained from the Tourism Development Council. Those seeking adventure like to visit Rohtang in the month of May, when they can participate in a wide range of thrilling activities, such as snow scooter rides, skiing and mountain biking.