Probably the most famous church in Goa and one of the most revered by Christians globally, the Basilica of Bom Jesus in Old Goa is famed for housing the mortal remains of St Francis Xavier. This complex, along with some other churches of Old Goa, features on the UNESCO World Heritage list. Its exterior facade, built using black granite, is noted for Baroque architecture combined with Doric, Corinthian and composite influences.

Inside, the main altar is 30-ft-broad and 54-ft-high and its pillars have been erected using basalt from Bassein (now Vasai, a town in Maharashtra), approximately 300 km away. Richly gilded, it features the figure of infant Jesus Christ, above which is a statue of St Ignatius Loyola, founder of the Jesuit order. The latter gazes at a medallion, and above this is depicted the Holy Trinity (Father, Son and the Holy Spirit). The southern side of the basilica houses the chapel wherein are preserved the sacred relics St Francis Xavier. The church's interior is richly adorned with wood carvings and paintings that depict scenes from the lives of St Xavier. A silver casket, which contains the sacred relics of the saint, is divided into seven panels each of which contains two plates that are representative of the incidents of the saint's life. 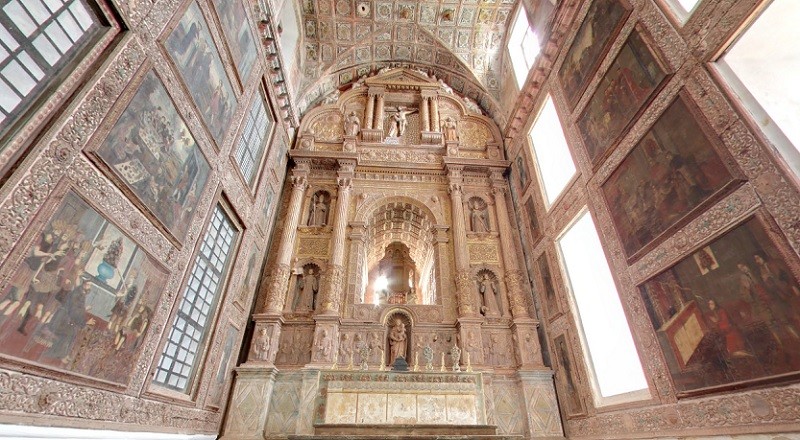 One of the most picturesque churches in Goa, this beautiful structure is located in Old Goa, near the Se Cathedral. Built in 1665 by Italian monks of the Order of Theatines, St Cajetan's Church is a fine example of Corinthian architecture. Niched within the external facade are four stunning statues of St Paul, St Peter, St John the evangelist and St Matthew.

The interior, also featuring Corinthian elements, displays Baroque, Rococo and Goan influences in gilded work. The main altar of the church is dedicated to Our Lady of Divine Providence. Originally called The Church of Our Lady of Divine Providence, the building of the church is constructed of laterite blocks that have been lime-plastered. The church’s façade has two towers on both sides that serve as belfry. On entering the church, one finds three altars on the left that are dedicated to the Holy family, Our Lady of Piety and St Clare. To the right are the altars of St John, St Cajetan and St Agnes. The largest of the altars on the right is dedicated to St Cajetan himself.

Our Lady of Immaculate Conception Church

Located in the state capital of Panaji, Our Lady of Immaculate Conception Church is believed to have been originally built as a chapel in 1541, to serve the religious requirements of the Portuguese sailors. The chapel eventually became a parish in 1600 and nine years later, it was replaced by a church. Its symmetrical zigzag stairway was constructed in the 18th century. The church is believed to have been modelled after the Bom Jesus de Braga in Portugal, with one middle and four side landings in perfect symmetry.

The statue of Our Lady was installed on a 5-m-high plinth on the middle landing in 1954. The church also houses an ancient bell obtained from the Augustinian ruins of the Church of Our Lady of Grace. It is considered to be the second largest of its kind in Goa, the largest being the Golden Bell housed in the Se Cathedral. With its white facade displaying Portuguese-Baroque and Goanese styles of architecture, the church has two towers and a looming belfry. Due to the fact that it can be seen from very far away, it is also called the crown of Panaji. One needs to climb 78 steps to reach the church. While the main altar in the church is dedicated to Mother Mary, the other two altars on either side are intricately carved and gold-plated. One of these belongs to the crucifixion of Jesus and the other to Our Lady of the Rosary. Marble statues of St Peter and St Paul flank these two altars. On December 8 every year, the church is illuminated to celebrate the Festival of Our Lady of Immaculate Conception. These celebrations are preceded by nine-day novena to Our Lady. 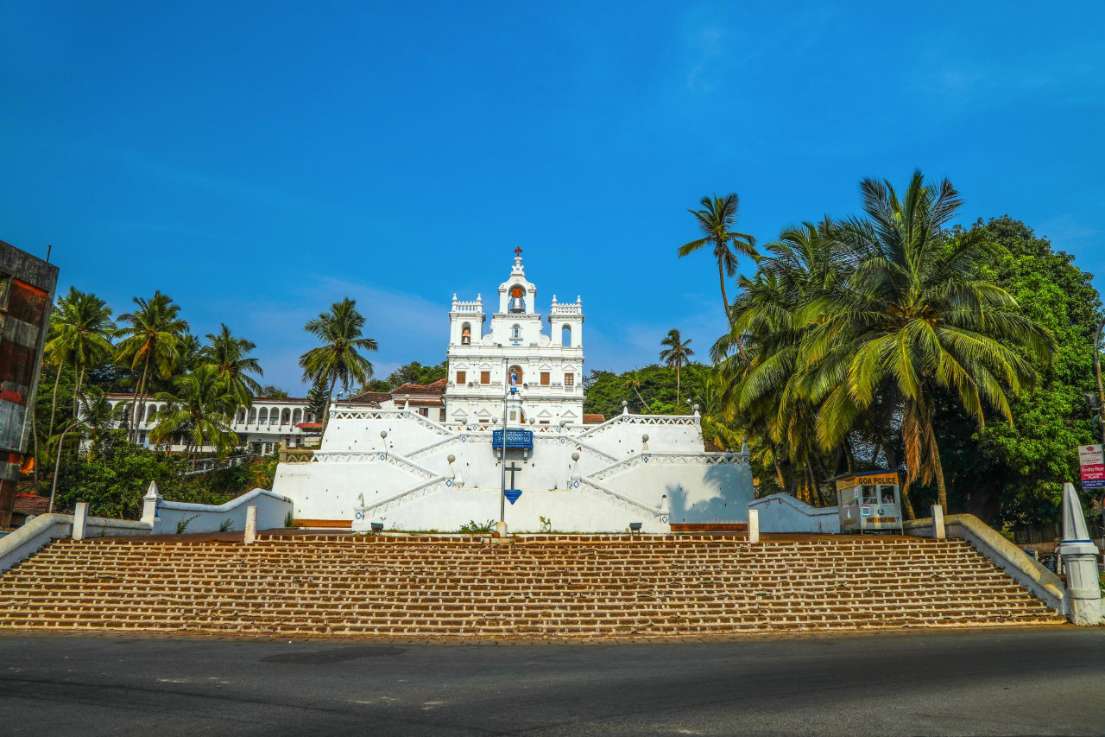 Join The Festivities In Goa