French Riviera of the East

Puducherry (the official name was changed from Pondicherry in 2006) not only fascinates you, it makes you fall in love - with its colonial structures, seafront promenades, spiritual havens, tree-lined boulevards, unexplored and pristine beaches, and enchanting backwaters. It is also known for textiles, silk and traditional doll-making as well as high quality pottery, handmade paper, leather and aromatics. And of course, the never-to-be-forgotten French connection.

French is still popularly spoken and understood by residents from all walks of life. The Sri Aurobindo International Centre of Education, Lycée Français, Alliance Française and various other schools are strictly French-medium, with Indian languages being taught as a second language. With this rather ubiquitous presence of all things French here, Puducherry is also known as “la Côte d'Azur de l'Est”, translating to the French Riviera of the East.

A popular weekend getaway, Puducherry, or Pondy as it is colloquially known, observes an influx of travellers, majorly from Chennai and Bengaluru, during the holiday season. Given its ever-increasing fame, Puducherry’s residents are now engaged in several services that cater specifically to tourists, especially with water sports, multi-cuisine restaurants, pubs, souvenir shops etc.

Its history is long and colourful. Some heritage structures in Puducherry date back to the 18th century, from the times when it was a French colony. The French connect is evident while taking a stroll in the old quarter, chiefly from the buildings that display a strong French architectural influence.

Though it is not a beach destination to the tune of Goa, and its appeal lies in the spiritual rather than the hedonistic, Puducherry has some virgin, pristine and quiet beaches, which offer stunning views during sunrise and sunset. What’s more, these play host to water sports like kayaking, canoeing and swimming as well.

As for those who like spending time with nature, Puducherry is a treasure trove of sorts. While the city itself is green, thanks to the efforts of the ashram disciples and citizens alike, there are a number of designated areas where one can relax and rejuvenate.

Rich history, beaches, spiritual illumination – Puducherry has it all. But the one thing that leaves visitors wanting to never leave is its food. The food here is a quirky culmination of the spices of the South India and the culinary sensibilities of France, with a generous dose of Italian quirk thrown in. There are hundreds of restaurants in the city, ranging from chai stalls selling hot buns to luxury hotels that cook up a lavish spread for their guests.

The best time to visit is after the onset of winter, from October to February, when the temperatures dip, making strolling down Puducherry’s French streets an absolute pleasure.

The legacy of Puducherry through its attractions

One of the most popular and frequented temples in Puducherry is the Manakula Vinayagar Temple in White Town. More than 500 years old, it is dedicated to Lord Ganesha. Forty incarnations of Lord Ganesha are carved into its monumental interior with... The green lung of the city, Bharathi Government Park is popular for...

Laid out in 1826, the Botanical Gardens was laid out in ornate French...

A major port, Karaikal, is about 130 km south of Puducherry, and... Festivals to celebrate in Puducherry A fascinating museum, the Jawahar Toy Museum is extremely popular... Being a port city, Puducherry was and still is an important centre... The private Paradise Beach, an absolute must-visit, is around 8 km...

The French quarter, also known as White Town, ostensibly due to its... The temple at Mailam, situated 30 km from Puducherry atop a hillock...

A short road trip will take you to the country's first National... The green lung of the city, Bharathi Government Park is popular for... Puducherry is largely associated with Sri Aurobindo and his... A major port, Karaikal, is about 130 km south of Puducherry, and...

Puducherry holds enlightenment of the mind and spirit at its heart, a...

One of the most popular and frequented temples in Puducherry is the...

The 1.5 km long Promenade beach takes a place of pride in Puducherry....

Basilica of the Sacred Heart of Jesus Church

Owing to the rising influence of French missionaries in the region, a... A short 20-minute drive from Puducherry will bring visitors to... Laid out in 1826, the Botanical Gardens was laid out in ornate French... 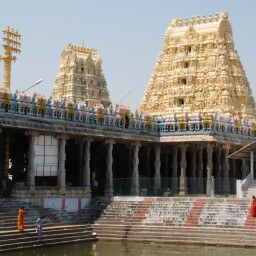 The closest international airport is in Chennai, around 135 km from Puducherry. Chennai has excellent connections with all major cities in India and direct connection to Europe, USA, Middle East and South East Asia. Trichy airport (220 km) and Bengaluru airport (320 km) are the other nearby airheads.

Puducherry is well-connected to all districts and major towns of Tamil Nadu, Karnataka, Kerala and Andhra Pradesh. There are frequent buses from Chennai.

Villupuram is the nearest railway junction, well-connected to Chennai, Madurai and Trichy.