Often referred to as the cultural capital of Kerala, Thrissur is a centre point of energetic festivities. This city hosts its own film festival, the Thrissur International Film Festival, among many other cultural events throughout the year. It invites tourists for its rich culture and heritage as it carries a strong influence of Indian, European and Arab sources from medieval and colonial times.

Thrissur is most popular for a form of body art that is practiced here. It is known as Puli Kali or Kaduvakali and is mostly showcased during the festival of Onam. Another festival to look out for is Thrissur Pooram, when decorated elephants march through the city to the Vadakkunnathan Temple. A visit to the Indian coffee house that was established in 1958 is also worth the while as it is called the cultural hub of the city.

The area of Thrissur played an important part in fostering trade relations of Kerala with other parts of the world. Earlier, the city was called Trichur and it is said that it was founded by Lord Parasurama, the sixth avatar of Lord Vishnu.

The legacy of Thrissur through its attractions

Exuding a mystique and serene vibe, Athirappilly (Athirapally) Waterfalls is the most famous falls in the state of Kerala. Located about 60 km from Thrissur, it is a popular picnic spot and lies near the Vazhachal Waterfalls, which is another...

The temple is located in the heart of the city and is an... 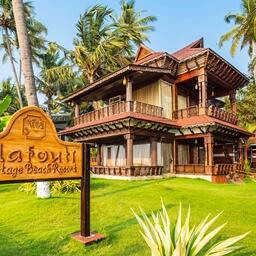 The temple is located in the heart of the city and is an...

Dedicated to the legendary warrior, Kunjali Marakkar, who fought the... A vibrant potpourri of art, culture, food, carnivals and festivals,... The nearest airstrip is Kochi airport, which is well connected to all the major cities in the country.

There are regular bus services to Thrissur from other major cities.

Thrissur Railway Station is a major railhead of South India. It is well connected to other major cities of India.