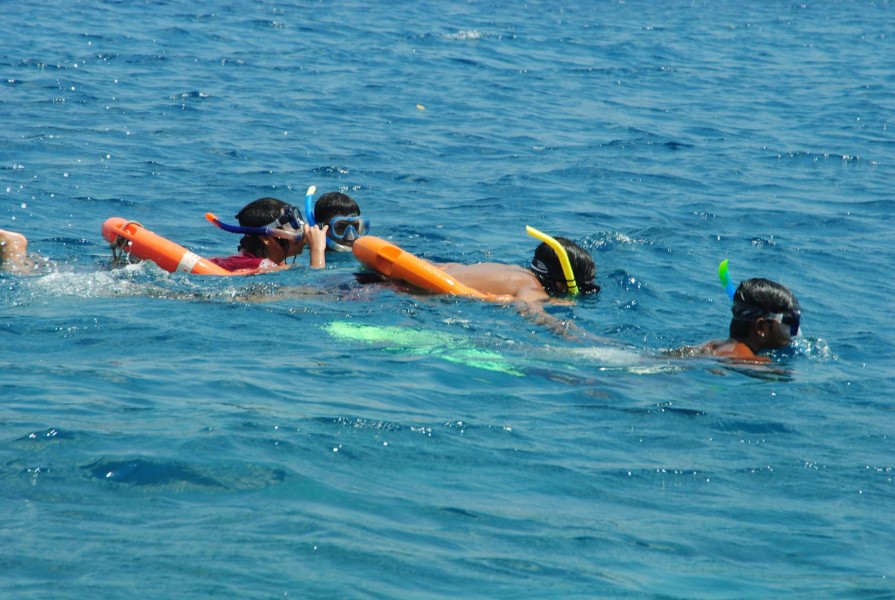 Wade your way through the marine treasures on the coastline of India as you snorkel in various renowned destinations in the country. From the spectacular Andaman and Nicobar Islands to the scenic Netrani Island, there are a plethora of options.

Havelock Island, Andaman and Nicobar Islands
The Havelock Island is a pristine natural paradise with white beaches, clear blue waters, lush forests, rich coral reefs and multi-coloured aquatic life. Elephant Beach, one of the three gorgeous beaches on the island is idyllic for snorkelling as its shallow water brings the coral reef very close to the surface, giving the swimmer panoramic vistas of marine life.

Long Island, Andaman and Nicobar Islands
This aquatic playground with its relaxed lazy island charm boasts rich marine wealth, scenic beaches, ancient caves, green hills and magnificent ecosystem that make it a perfect package for adventure tourism. Lalaji Bay, a remote swimming and snorkelling spot in Long Island is the main attraction. One can take a boat from the Rangat Jetty to reach this beach and the ride, which cruises through scenic mangroves, takes around 90 minutes.

Laxmanpur Beach, Andaman and Nicobar Islands
The secluded beach of Laxmanpur in Laxmanpur village, lies 2 km north of the Neil Island jetty. The beach is carpeted by white shell sand and has shallow water, making it ideal for snorkelling and studying the coral reef. Visitors can find several corals and seashells that can be collected as souvenirs scattered across the beach. Sunbathing and swimming are other major activities here. The best time to visit the place is during low tide as the retreating sea leaves behind many secrets from its treasure trove.

Kalpeni, Lakshadweep
Lying to the north of Kavaratti, Kalpeni Island boasts a huge storm bank of coral debris that runs along its eastern and southeastern shorelines. It is believed that a violent storm in 1847 threw up huge coral boulders along these shores. A haven for adventure seekers, the island offers exciting wonders of snorkelling. A major attraction of the island is the Tip Beach that has a shallow emerald lagoon lapping at its white sandy shores.

Kadmat, Lakshadweep
Also know as cardamom island, Kadmat is a coral island that belongs to the Amindivi sub-group of Lakshadweep islands. It is surrounded by spectacular and large lagoons on the eastern and the western sides, with long, sandy beaches, an invaluable wealth of coral habitats and reef banks making it one of the most attractive snorkelling stopovers in Lakshadweep. The island abounds in flora and fauna, which can be explored through snorkelling.

Thinnakara, Lakshadweep
The glorious island of Thinnakara lies close to the Bangaram island and is a haven as its crystal clear waters and marine life make it an ideal place for snorkelling. At night, one can sprawl on the beach and watch a billion stars light up the dark sky.

Netrani Island, Karnataka
A quaint haven for snorkellers, Netrani boasts rich marine biodiversity. From corals and parrotfish to triggerfish and butterflyfish, there are marine delights aplenty. You can also spot sea turtles in shallow waters.

Goa
If you love snorkelling, you cannot find a better place than Goa. There are an array of options on offer at several beaches such as Palolem Beach, Grande Island, Monkey Island and Sinquerim Beach. The best time for this from October to April.

Tarkarli, Maharashtra
A popular beach destination, Tarkarli boasts dense green vegetation. Skirted by blue-green waters of the Arabian Sea, Tarkarli is an ideal site for snorkelling. With a 20-ft-deep clear view of the sea, snorkellers can have a delightful time sighting the colourful corals and marine life.