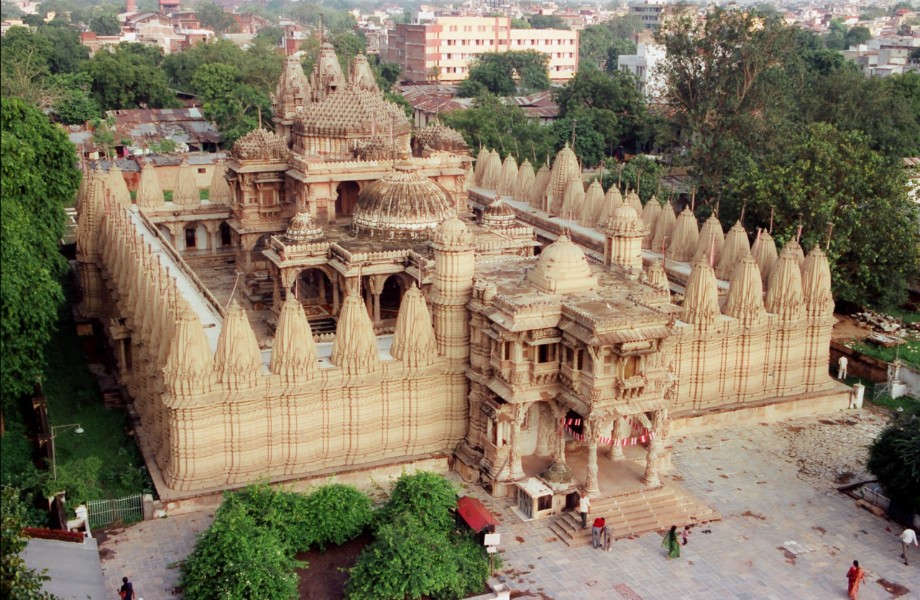 Built as a tribute to the 15th Jain tirthankar (saint) Shri Dharmanatha in 1848 AD, the Hutheesing Jain Temple cost trader Hutheesing Kesarisinh, who commissioned it, almost INR 8 lakh during the period when the state was facing famine. The idea was to employ hundreds of labourers and artisans so that they had steady income during this period. Most of these artisans belonged to the Sompura and Salat communities, which are famous for their craftsmanship skills in sculpting and stone carving, especially in Hindu and Jain temples. Unfortunately, Kesarisinh, only 49 then, died while the temple was being constructed. His wife, Sethani Harkunvar, supervised and completed it. Like most other Jain temples, it is made of white marble with intricate carvings. It also has a mandapa (pillared-outdoor hall) capped by a large dome, which is supported by 12 ornate pillars. At the east end of the mandapa stands the garbha graha (main shrine) that reaches up to three impressive carved spires. It is further surrounded by 52 smaller shrines of various tirthankars. There are wide porches with decorated columns on the three outer sides of the temple. Recently, a 78-ft-high tower, called the Mahavir Stambha, was established in the courtyard by the front entrance, resembling a renowned tower at Chittor in Rajasthan. Several of the motifs used in the tower's design will remind one of minarets from the Mughal period. Legend has it that for over 170 years, a lamp has been lighting below the sanctum sanctorum.

Other Attractions in Ahmedabad

One of the oldest and the longest gateways of the 600-year-old city, Teen...

After Sultan Ahmed Shah I took over Karnavati and rechristened it...

Popularly known as Shaking Minarets, these unique structures have left...

A day in Ahmedabad